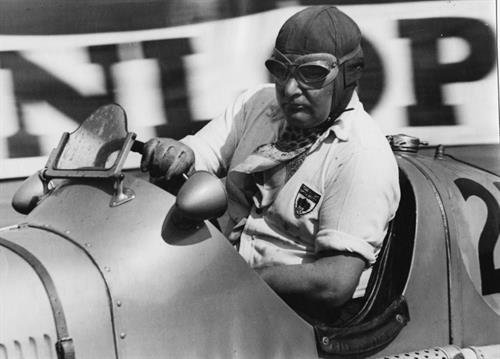 He crashed numerous cars and aeroplanes, did his best to drown an admiral, and his dog delayed a critical wartime convoy for four days by eating top-secret naval documents. Yes, Duncan Hamilton was certainly a larger than life character but was also one of Europe’s premier racing drivers of the post-war era, who subsequently penned the funniest motor racing autobiography to date, Touch Wood.

James Duncan Hamilton was born in Cork, Ireland. Aged two he knocked himself unconscious by crashing his pram down a flight of 38 steps. Later, while studying at Brighton College, he drove a master’s car through a wall – arguably all useful preparation for his later years as a competition driver of notable skill and bravura. His introduction to the world of motorsport was gained at Brooklands. By donning overalls and carrying a bucket of water he used to blag his way into the pits, where he would offer assistance to the bona fide mechanics, ultimately working on the cars of such noted drivers as bandleader Billy Cotton. Brooklands also opened his eyes to aviation, and his eventful war years were spent in the Fleet Air Arm, where he was most frequently seen at the controls of Supermarine Seafires. Post-war life was inevitably boring by comparison, and it was then that the motor racing bug really bit.

Works Ferrari driver Froilán González described him as ‘the world’s fastest wet weather driver’. However, he was no slouch in the dry either, and his many achievements behind the wheel included: outright victory with Tony Rolt (of Colditz fame) in the 1953 Le Mans 24 Hours, and the 1956 Reims 12 Hours with Ivor Bueb – both of which results were achieved aboard works Jaguars. The Hamilton and Rolt pairing very nearly eclipsed the 1954 Le Mans race in a factory-supplied Jaguar too, finally losing out to González’s far more powerful Ferrari by the race’s narrowest margin for 23 years. In 11 seasons of top class motorsport, Duncan: competed against such all-time greats as Fangio, Ascari, Villoresi, Castellotti, Moss and close personal friends Collins and Hawthorn; drove Grand Prix cars from Lago-Talbot, Maserati, HWM and ERA, and works team sports cars for Jaguar, Ferrari and Healey. He also contested Le Mans, the world’s most arduous of all motor races, on no less than nine consecutive occasions.

The countless incidents that befell him are equally legendary. When transporting his ex-Malcolm Campbell R-Type MG to the Brighton Speed Trials he spotted a Bugatti in the mirror, so moved over and waved it by. It was only when it drew level he realised it was driverless, and in fact his own car that he’d been towing behind the MG – the story ended with a felled lamppost. It was when dicing for the lead during the 1953 Oporto Grand Prix that he was forced off the track at 125mph, causing him to demolish a steel pylon and eliminate the city’s electricity supply; not to mention break nine of his ribs, neck, jaw and a collarbone. Even his famous Le Mans win was not achieved without pain, as he suffered a bird strike on the Mulsanne Straight that smashed both his Jaguar’s aero screen and his nose. Arguably only Duncan Hamilton could have got himself fired for winning the Reims 12 hours (he was deemed to have breached Jaguar team orders), only to promptly join Ferrari as a teammate to none other than Juan Manuel Fangio. He’s almost certainly also unique in being stopped for speeding while en route to participating in a TV programme on road safety.

Hamilton was understandably highly respected by Jaguar, for whom he achieved many successes, and was, therefore, the first privateer to be granted racing examples of both its C-Type and D-Type models. However, looking back on his extraordinary driving career, he rated his Lago-Talbot Grand Prix car as the favourite among countless competition machines. Despite such fondness, it was only when he came to sell his faithful racer that he recalled storing it in a ‘coal-hole’ in Dieppe many years before. Initially even unsure of the house concerned, he eventually found the car buried but unharmed under a ton of domestic coke.

Following the tragic death of his close friend Mike Hawthorn, Duncan officially announced his retirement from motorsport in April 1959, whereupon he concentrated his energies on sailing and growing the highly regarded car dealership he had founded 11 years earlier. Nowadays known as Duncan Hamilton ROFGO, it has been run by his son Adrian for the past 45 years, and is renowned as one of the world’s premier traders in competition and classic cars (www.dhrofgo.com). Duncan passed away on Friday, May 13, 1994, aged 74 – surely the most apposite of dates for a man that lived life at full throttle from day one!

Said Adrian Hamilton: “My dad was one of the last of that extraordinary band of post-war drivers who, hardened by the hostilities, feared nothing and were determined to enjoy every minute of their lives to the maximum. Their enthusiasm for racing was only matched by that for partying afterwards, and we’ll never see their like again. I am fiercely proud of all he achieved and am sure I won’t be alone in raising a glass to him on April 30, the centenary of his birth.”