TOM IS TRAINING FOR THE TOP!

2020 saw Tom Edgar take his first steps into car racing in the highly competitive Ginetta Junior Championship on the support bill to the BTCC.

Tom is the son of multiple champion in various classes of Irish motor racing, Mike Edgar.

Rather than listen to his Dad, Tom was guided by BTCC driver, Jake Hill, who is no slouch at all.

After taking the first half of the compressed season to acclimatise, he began to get great results in the second half. At the end he was a great sixth in the points, 35 clear of his nearest chaser. He was also the highest placed driver in the TCR stable.

Mike and Tom have made their intentions clear for 2021 by engaging the services of Phil Glew and 2020 BTCC Champion, Ash Sutton, as driver coaches. 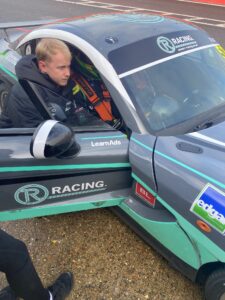