Tom Edgar Had A Hard Time At Brands But Is Still In The Title Hunt.

At the Brands Hatch B.T.C.C meeting on 26th and 27th June, Tom Edgar began the weekend with encouraging flashes of pace in testing on Friday, especially in the wet weather conditions –  a promising start, considering the race weekend was forecast for rain. He was always going to be one-to-watch as he was clearly in the lead in the championship. While this was a great place to be, it also brought with it the pressures to stay there.

Qualifying on Saturday did not go to plan. Friday’s promising pace never quite manifested itself in the session. However, Tom was able to pull out a strong enough performance to start on the second row for Race One and Race Two despite the challenging circumstances. 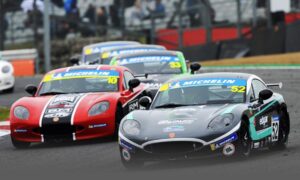 In Race One, Tom was looking strong but contact created damage, resulting in a heavily hindered pace.   He pushed on hard and despite the damage affecting his performance, was still able to cross the line in fourth.

Race Two began well and he was challenging the top three right from the off. But then red flags affected his rhythm, which allowed a train of cars to pass.  He fought hard to regain positions but unfortunately ran out of time and finished eighth. 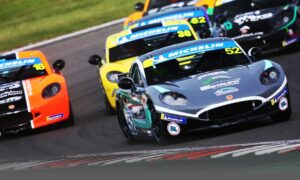 The start in Race Three didn’t quite go to plan and Tom quickly dropped from eighth to twelfth.

The race was plagued by safety cars, with a final safety car coming out after a competitor covered the track in oil. Eventually, the race officials showed the red flag, ultimately ending both the race and Tom’s chances to make up any places.

A challenging weekend overall but Tom remains at the top, currently sitting in second place in the championship, behind the leader by just 1 point.  As Tom reflected he explained that he plans to learn from his mistakes in the weekend and come back to Oulton Park a stronger competitor.