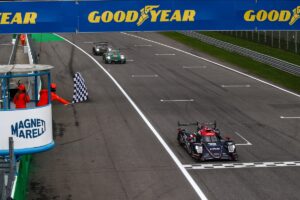 United Autosports are preparing for round four of the European Le Mans Series and round three of the Michelin Le Mans Cup at Monza, Italy this weekend.

The team are currently joint leaders of the Michelin Le Mans Cup championship with the #23 Ligier JS P320 of John Schauerman and Wayne Boyd. The pair are aiming for their third podium of the season this weekend to maintain their championship lead. The #22 Ligier of Gerry Kraut and Scott Andrews lie fourth in the championship after a disappointing DNF last time out at Paul Ricard. The #32 Ligier of Daniel Schneider and Andy Meyrick are also hoping for a podium visit in Italy after a tricky start to their second season with the team.

The European Le Mans Series LMP2 team returns to the scene of their 2020 championship win, when the #22 crew scored their third race win of the season to clinch the championship win a round early. This time, the #22 crew of Phil Hanson, Tom Gamble and Jonathan Aberdein are aiming for the win to stay within reach of the 2021 championship. They currently lie third in the #22 Oreca 07. The #32 line up of Job van Uitert, Manuel Maldonado and Nico Jamin are also aiming high after finishing third last time out at Paul Ricard.

The LMP3 team are also hoping to return to the podium once again as the #2 Ligier JS P320 of Wayne Boyd, Edouard Cauhaupe and Rob Wheldon aim to improve on their third-place finish at Paul Ricard. Jim McGuire, Duncan Tappy and Andrew Bentley in the #3 AERO Ligier will also be hoping for a strong finish, heading into the second half of the 2021 season.

The Michelin Le Mans Cup race will begin at 17:00 on Saturday 10 July, with the European Le Mans Series race beginning at 11:00 on Sunday 11 July.

Wayne Boyd on LMP 3
“I’m looking forward to Monza, it’s one of my favourite tracks on the calendar. We were on pole there last year so hopefully we can do the same again this year. It’s been quite a difficult year so far, we have been so unlucky with the results but I feel with our line up and car we are more than capable of winning so hopefully we can get back on the top step.”